Youth of the Year

The Lions Club of West Pennant Hills Cherrybrook supports and encourages the development of local youth.

Each year the Club sponsors entrants aged between 16 and 18 from local high schools into the Lions International’s Australian Youth of the Year Quest.

The Quest is designed to encourage, foster and develop leadership in conjunction with other qualities such as citizenship, Community Involvement, sportsmanship and public speaking.

West Pennant Hills Cherrybrook Lions have had a continual involvement in the Youth of The Year Quest for the past 51 years and during this time have developed many outstanding citizens in leadership within our community today.

In this year’s judging, the School Captain of William Clarke College Kellyville, Corbin Ellis, beat a very strong field of contestants from other local schools to advance to the Regional Final. He was supported by his teacher at the judging, Mrs. Heather Kroll.

Corbin, a Year 12 student, proudly represented his school and its values during the Judging. He is an important part of the Student Leadership team at William Clarke College and has achieved high rankings in his academic studies. He is very involved with his College’s sporting activities, particularly cricket, as well as cultural and citizenship interests. Corbin has received the Headmaster’s Gold Medallion and 4 awards at that level.

Corbin is a member of Kellyville Cubs & Scouts and is now part of the senior scouts, the Venturers. In 2018 he was awarded The Australian Scout Medallion . He aspires to continue with his scouting involvement to provide a roll model for junior scouts to mentor and encourage their personal growth and development towards being good citizens.

Corbin plans to study for a Bachelor of Law degree with a Bachelor in either Politics, Philosophy & Economics or Social Science.

Corbin expressed his thanks to the Club’s Youth of The Year Chairman, retired teacher Mr. Gavin Ridley and his committee.

If Corbin is successful at the Regional Finals, he will advance to the Sydney Lions District Final on March the 28th 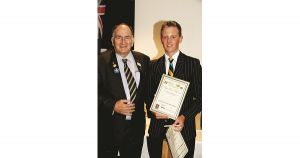