Hidden in the Hills Climbing Clematis

Hidden in the Hills Climbing Clematis 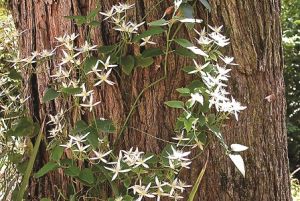 Scattered throughout the open forest are many plants that climb over adjacent shrubs, both small and tall, as well as clinging to small trees in the Hills Climbing Clematis.

They have the tendency to create confusion when combined with the foliage of the host plant which is supporting the scrambling vine as it reaches upwards. It is usually difficult to visually separate the two plants until either one comes into flower.

One such vigorous species is the Clematis, of which there are two closely related varieties living often in close proximity to each other in local bushland.

Both flower at a similar time of the year and their flowers are closely similar in size, shape and colour. Probably the most convenient method to discern which is which, is to inspect the foliage of the plant. After the flower has matured, there forms a seed pod which bursts into fluffy, featherlike extensions which have given this plant one of its common names. This appears to be more pronounced in the Clematis aristata variety.

These two varieties are well suited to the home garden where a suitable trellis can support the extensive network of tendrils and branchlets that make up the plant which in turn can provide a dramatic display of cream flowers from August to November.